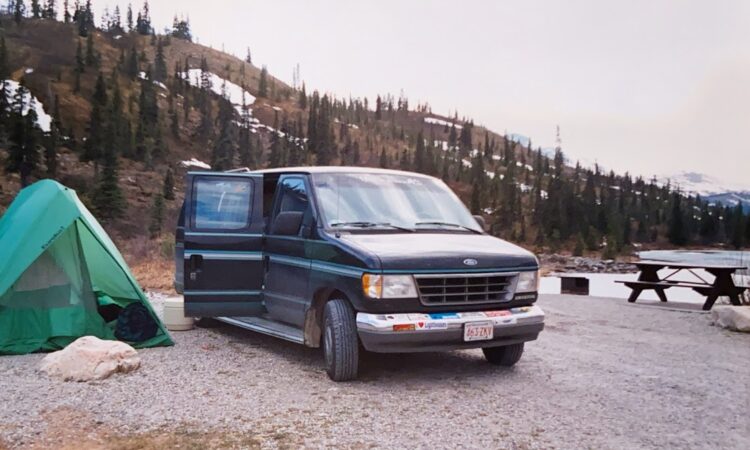 Sometimes when bad things happen you can turn them into experiences of a lifetime. I was relatively young when the plant I was working at as Quality Supervisor shut its doors after over 100 years of operation. I took my severance package and seeing that I was not tied down to returning at a given time I packed up the van and headed to Alaska from my home in New England. I took my elderly parents with me since they had both recently retired paying them back for all of the family trips they took us kids on when we were young. We headed north up through Vermont passing over the border to Montreal. You can click the links for more in depth posts on each attraction. In Quebec we picked up the Trans Canada Highway and headed west averaging 600 miles per day.

Ontario brought us to the north shore of Lake Superior.

We entered Manitoba stopping for the night in Winnipeg before passing the longitudinal center of Canada.

Saskatchewan and the open plains are next up.

Into Alberta and a visit to the West Edmonton Mall.

Heading north out of Edmonton we finally made our way to the Alaska Highway. The highway starts at mile zero in Dawson Creek British Columbia.

Ranging rivers, mosquito infested forests and many trading post style shops like the “Trappers Den” highlight the start of the trip.

Summit Lake Provincial Campground was one of the best sites on the trip even though it was quite cold, at least no mosquitos!

At milepost 613 is Watson Lake, Yukon Territory with its signpost forest.

Whitehorse, Yukon is a spot for car repairs or upgrades before heading deeper into the wilderness.

The SS Klondike National Historic Site and the canyon are nice visits.

Into Alaska and the end of the Alaska Highway at Delta Junction and then on our way to Tok where a meal of caribou sausage and salmon chowder in a bread bowl was our welcome to the state.

Heading north and west we went through Anchorage and down to Homer and Chugach State Park.

Back north brings us to Denali National Park.

We visited Fairbanks and after a short detour up the haul road towards Barrow we headed back via the Top of the World Highway.

Coming to the Yukon River you board a ferry across to Dawson City, Yukon.

Back through Kluane we took the South Klondike Highway towards Carcross, The Carcross Desert, Emerald Lake, Bove Island,the Venus Mill and back into Alaska to Skagway.

Instead of repeating the route south along the Alaska Highway we took the Cassiar Highway south. We passed by Bear Glacier and made our way to the charming communities of Stewart, British Columbia and Hyder Alaska.

We turned east heading into Jasper National Park in Alberta,

and then along the glacier highway to Banff National Park.

Out of the parks and back into the plains by Calgary.

Back into the United States brings us to Glacier National Park with its Going to the Sun Road and Many Glacier Region.

Heading towards the western entrance to Yellowstone National Park we passed by Earthquake Lake.

The highlights of Yellowstone include The Grand Canyon of the Yellowstone and its waterfalls,

but most of all the wildlife. Having just returned from Alaska the wildlife viewing here is even more spectacular.

Badlands National Park was next on the agenda. This again was one of my mother’s favorite parks as it was a setting of many of her historical fiction novels she liked to read.

Into Minnesota with a stop at Pipestone National Monument.

Down to Iowa and Effigy Mounds National Monument.

Some heavy miles going east we made one final stop at the Women’s Rights National Historical Park.

A visit to my aunt and uncle in Cohoes, New York and then home. It was good to see New England and home after many months on the road but the memories of the trip will last a life time. My parents would both pass in a few years and I was glad I could give them this trip in their final years.