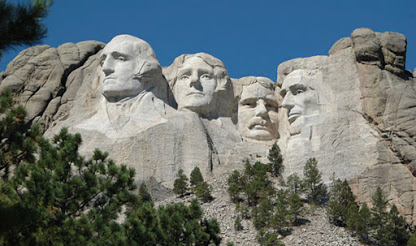 Mount Rushmore National Memorial is centered on a colossal sculpture carved into the granite face of Mount Rushmore in the Black Hills in Keystone, South Dakota. Sculptor Gutzon Borglum created the sculpture’s design and oversaw the project’s execution from 1927 to 1941 with the help of his son Lincoln Borglum. The sculpture features the 60-foot heads of Presidents George Washington (1732–1799), Thomas Jefferson (1743–1826), Theodore Roosevelt (1858–1919), and Abraham Lincoln (1809–1865), as recommended by Borglum. The memorial park covers 1,278 acres and the actual mountain has an elevation of 5,725 feet. There was strong opposition from the Lakota (Sioux), who consider the Black Hills to be sacred ground, the land was stolen from the Indians when the treaty was broken after the discovery of gold in the Black Hills. The mountain into which it was carved is known to the Lakota Sioux as Six Grandfathers. If you can look past the crimes against the Lakota People and Borglum’s white supremacist leanings it is an impressive sculpture.

An interesting side note was one of my visits to Mount Rushmore came towards the end of a months long road trip to Alaska which included visits to the Canadian Rocky Parks, Glacier National Park and Yellowstone. All during the trip we were doing game drives and blind observations to observe animals. We had seen wolves, grizzly & black bear, dall and bighorn sheep, elk, moose, etc. The one animal We had yet to see was a Rocky Mountain Goat. Luckily we saw one on our visit to Rushmore.