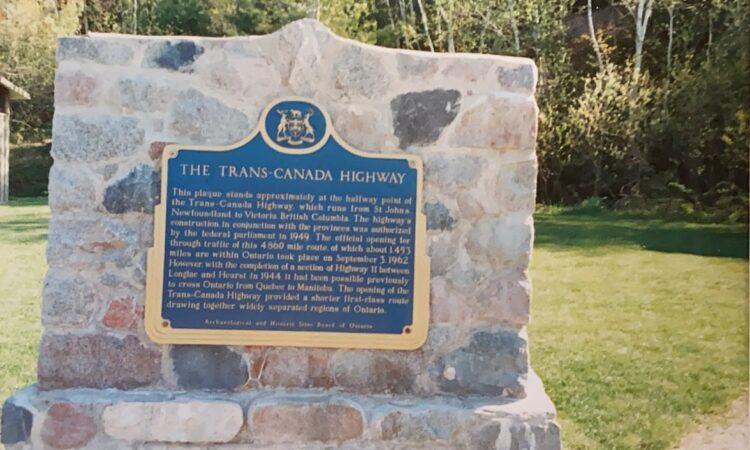 The Trans-Canada Highway is a transcontinental federal-provincial highway system that travels through all ten provinces of Canada from the Pacific Ocean on the west to the Atlantic on the east. The main route spans 4,860 miles across the country, one of the longest routes of its type in the world. The highway system is recognizable by its distinctive white-on-green maple leaf route markers. On our road trip up the Alaska Highway we made our way from our home in New England to Montreal where we caught the Trans Canada Highway heading west. Driving through Quebec and into Ontario we reached the midpoint of the Trans Canada.

A truly awe inspiring part of the drive was going along the north shore of Lake Superior. Realizing that you are seeing a freshwater lake and not an ocean gives you even more of a sense of wonder.

Many scenic wonders in Ontario but we couldn’t stop as we were on to Alaska.

Into Manitoba and through Winnipeg,

we reach the longitudinal center of Canada.

In from of us are the Canadian Plains and the endless fields of crops and pasture as we enter Saskatchewan.

Alberta is where we leave the Trans Canada and head north into British Columbia to catch the Alaska Highway,

but first a stop at the West Edmonton Mall which at the time of our trip was the largest mall in the world. Today it is not even in the top ten!

Someone once said the best way to see a country is to drive through it and I wholeheartedly agree. We really did not do the trip justice as we were on our way to Alaska but it was still an experience I will always cherish.