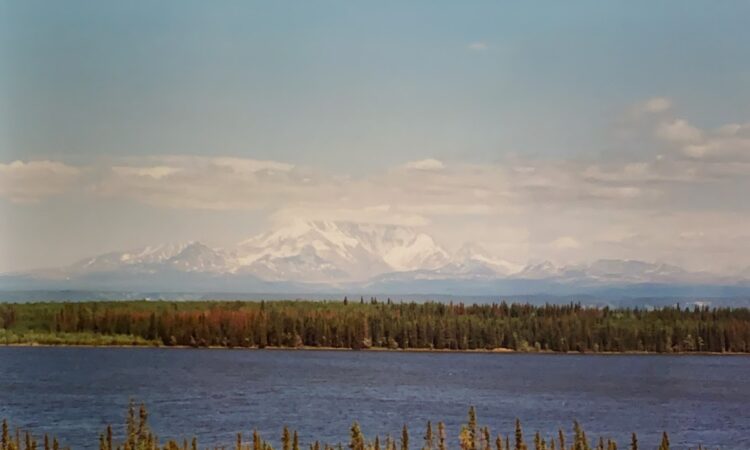 I have always felt that the journey is as important as the destination, with this in mind I decided that I would drive to Alaska from my home in New England via the Trans Canada and Alaska Highway. The Alaska Highway begins with mile 0 in Dawson Creek, British Columbia.

The first night’s stay was in a British Columbia mosquito infested campground.

Fort Nelson, BC and the Trappers Den were next en route.

Summit Lake (Stone Mountain) Provincial Campground was a pleasant change from the mosquitos at lower elevation. It was very cold I made good use of the caribou skin I purchased at the Trappers Den. I had the campground all to myself.

At milepost 613 is Watson Lake, Yukon Territory with its signpost forest.

Milepost 615 brings you to the junction with the Cassiar Highway, I would take this route on the way back.

Whitehorse Yukon was a welcome respite with hotels, stores, garages and other travel amenities.

The SS Klondike Historic Site preserves an old paddlewheeler that used to ply this part of the Yukon River from Whitehorse to Dawson City.

A junction with the Klondike Highway will bring you to Carcross, Yukon with its desert

and Skagway Alaska. A side trip I again would take on the way back down south.

Emerald Lake, Bove Island and the Venus Mill are also along this route.

You next wind your way through the expansive wilderness that is Kluane National Park.

At mile 1061 you enter Burwash Landing with its giant gold panning pan.

Mile 1186 brings you to the Alaska border.

Delta Junction, Alaska at mile 1422 is the end of the Alaska Highway.

A journey that holds its own with the final destination.