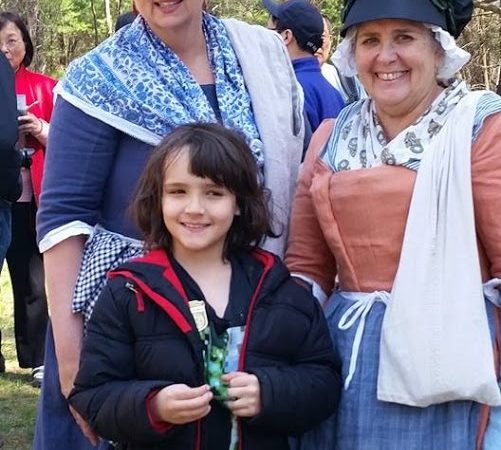 Patriots Day is a unique holiday in Massachusetts where we celebrate the patriots who were instrumental in our fight for independence as a nation at the start of the American Revolution.  It is a three day holiday culminating in the Patriots Day celebration held on the third Monday of April on or about April 19.  In Boston the Red Sox play an 11:00 AM game and the Boston Marathon runs from Hopkinton, Mass to downtown Boston.

The Minute Man National Historical Park preserves several areas associated with the battles of Lexington and Concord which officially kicked of hostilities between the colonies and the British empire.  On Patriots Day re-enactors recreate the battles at Lexington, Concord and on the “battle road” back to Boston.
Rita and Alex went early to all three locations taking in the festivities.

The re-enactors at Lexington each take the place of a soldier or farmer that was at the battle identifying himself with that person.  This provides an interesting perspective to the re-enactment.  You can note who falls to the ground wounded or killed and know that that corresponds to the actual people on the battlefield back in 1775.  After witnessing the “battle” at Lexington green they made their way to the battle road to see further re-enactments near the Munroe Tavern.  They were lucky enough to see Andrew Zimmern filming an episode of his show Bizarre Foods.  You can see the 2017 episode titled “Paul Revere’s Midnight Ride” for a view of the festivities and catch a brief glimpse of Rita and Alex in the crowd scene.

All of the Patriots Day events whether in Boston or at the park are fun and lively.