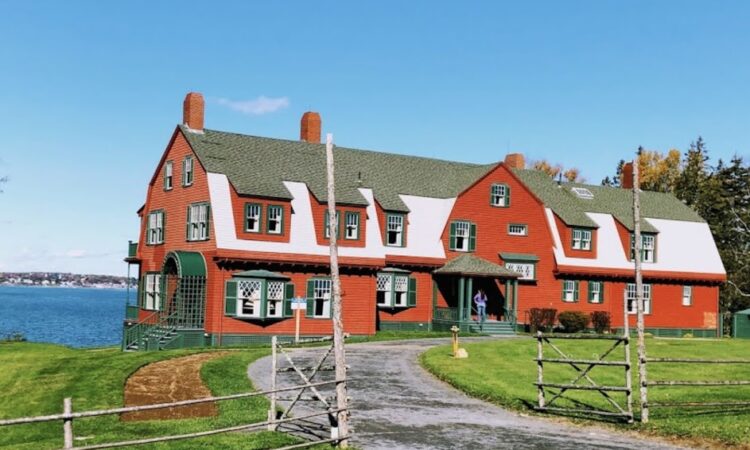 Roosevelt Campobello International Park preserves the house and surrounding landscape of the summer retreat of Franklin D. Roosevelt, Eleanor Roosevelt and their family. It is located on the southern tip of Campobello Island in the Canadian province of New Brunswick, and is connected to the mainland by the Roosevelt Memorial Bridge, at Lubec, Maine in the United States. Here in August 1921, 39-year-old Roosevelt, who would go on to become the 32nd President of the United States, was stricken by a severe paralytic illness, believed to be polio at the time, leaving him permanently paralyzed from the waist down. FDR was no longer able to stay at the “beloved island”, but he sailed there in 1933 and visited briefly in 1936 and 1939. Eleanor Roosevelt loved the cool summer weather and visited many times with her children and friends. Armand Hammer acquired the cottage in 1952. After Eleanor’s death in 1962, Armand Hammer deeded the property to the governments of the U.S. and Canada. In 1964, they created the 2,800-acre International Park. The cottage, built in the Shingle Style and completed in 1897, was designed by Willard T. Sears.

Adjacent to the Roosevelt cottage there is a natural area with hiking trails and viewpoints overlooking the bay.

The Mulholland Point Lighthouse is owned and administered by the park.