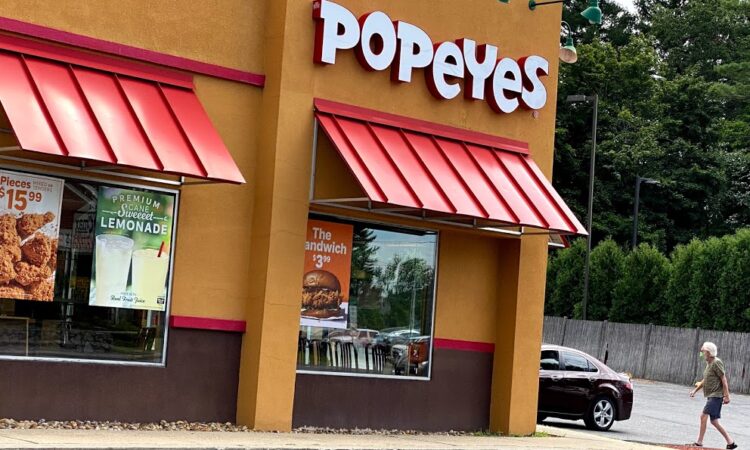 I left a review of Kentucky Fried Chicken several years ago as it was one of my favorite fast food stops when on a road trip. I can state today however that I seldom go to KFC because it pales in comparison to Popeyes when it is available.
Popeyes was founded in Arabi, Louisiana, a suburb of New Orleans. It first opened its doors on June 12, 1972, as “Chicken on the Run”. Owner Al Copeland wanted to compete with Kentucky Fried Chicken, but his restaurant failed after several months. Copeland reopened the restaurant four days later as Popeyes Mighty Good Chicken. By 1975, the company had been renamed as Popeyes Famous Fried Chicken. Copeland started franchising his restaurant in 1976, beginning in Louisiana. The chain expanded to Canada in 1984, and opened its 500th restaurant in 1985. Unfortunately there is only one location in New Hampshire this one in Salem.

Our entire family has fallen in love with the product. The chicken is moist and very crunchy with a delicious flavor as good as many southern chicken restaurants in my opinion.

The sides are fair to middling fast food fare with cajun fries, red beans and rice and mac n’ cheese being options.

It is the chicken that brings you and although I have not had one the chicken sandwich has quite the positive reputation. Check out this ASMR to get your appetite going.