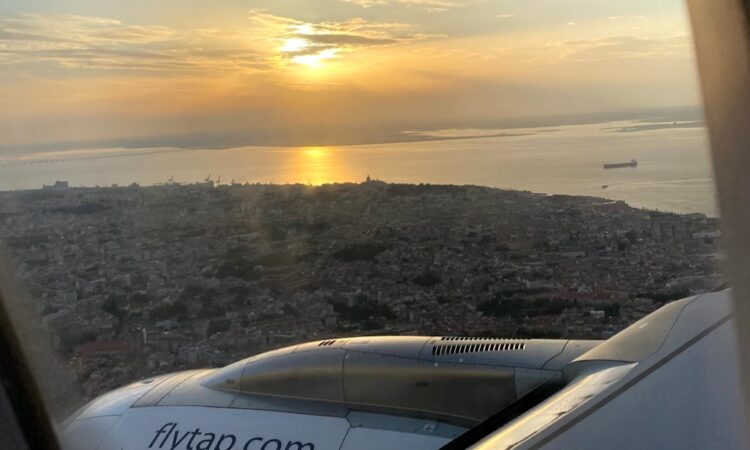 I had business in Portugal so Alex and I booked a flight on Portugal’s TAP Airline to Lisbon. TAP Air Portugal is the flag carrier airline of Portugal, headquartered at Lisbon Airport which also serves as its hub. TAP – Transportes Aéreos Portugueses – has been a member of the Star Alliance since 2005 and operates on average 2,500 flights a week to 90 destinations in 34 countries worldwide. The company has a fleet of 100 airplanes, all of which manufactured by Airbus with the exception of 22 made by Embraer and ATR, operating on behalf of the regional airline TAP Express. The airline was established as Transportes Aéreos Portugueses (Portuguese Air Transportations) on March 14, 1945; it began commercial services on September 19, 1946 with an inaugural flight from Lisbon to Madrid using a Douglas DC-3. Having been founded as a national institution, the airline was privatized for the first time in its history during 1953; throughout its existence, TAP would alternate between various forms of public and private ownership.
Boarding the plane at Logan International Airport in Boston, Massachusetts our flight was direct to Lisbon, Portugal. TAP is listed in two different terminals at Logan so we had a little confusion finding the right platform.

We eventually made our way to the right gate and boarded the plane.

was uneventful and included a lunch of ravioli and salad.

We arrived in Lisbon to a wonderful sunrise.

A gelato at the airport was a welcome first taste of Portugal.

TAP is a fine airline that will suit your needs, efficient if not spectacular.