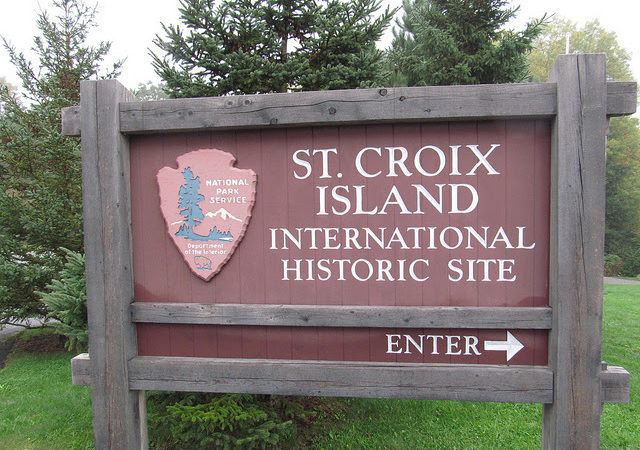 This tiny little park is in the far reaches of Washington County Maine near the Canadian border about halfway between Eastport and Calais on Route 1.  The park has a special meaning for me as my parents retired to this area which is quite close to my mother’s hometown of Eastport, Maine.  I used to come here often when the park was very under-developed with only an interpretive shelter open.  In recent years a short walking tour with statues of the local Passamaquoddy native american tribe and the ill-fated explorers who wintered over on the island representing a historical overview of the site.  There is also a visitor center open seasonally during the summer.  The actual site of the colony is in the middle of the St. Croix river and is not accessible from the park.  On the Canadian side of the river there is a Parks Canada site also commemorating the colonization effort.

Pierre Dugua led the colonization effort during the winter of 1604/1605 with devastating results. Thirty-five of the Seventy-nine men left on the island perished.  The colony was dismantled and relocated to Nova Scotia. This first effort at colonization brought some hard earned lessons that were used in future endeavors by France to colonize the New World.